This article appeared in The Intercept on February 27, 2017.

ON FEBRUARY 2, the American Civil Liberties Union held a press conference at the Terminal 2 arrivals gate of Los Angeles International Airport. The occasion for the press conference was the return of Ali Vayeghan, an Iranian lawful permanent resident of the United States who had been deported a few days before as a result of President Trump’s Muslim ban, to American soil. The ACLU had secured a court order that rejected the ban and called for Vayegahn to be allowed back into the country. It was a moment of triumph for advocates of immigrant rights.

Earlier that day, the ACLU had received a call from the office of Los Angeles Mayor Eric Garcetti. The mayor, they had been told, wished to participate in the press conference. Hector Villagra, the executive director of the ACLU of Southern California, stepped up to the bevy of microphones to introduce the mayor. “We need to know that this city will be a sanctuary city,” he said, with Garcetti standing at his side. “That’s right,” said someone in the audience. “Thank you,” said another. Garcetti himself gave the remark a few hearty claps.

When Garcetti stepped up to the podium, he echoed the “sanctuary city” line. “We are a city of sanctuary, of refuge,” he said, “and also of defense of our Constitution.”

The next speaker was Ameena Qazi, executive director of the National Lawyers Guild of Los Angeles. Wearing a sweater and a hijab, her short stature barely exceeding that of the podium, she blasted Customs and Border Protection, comparing their conduct to CIA black sites. Then she praised the mayor, or, perhaps, damned him with faint praise.

“I’d also like to thank Mayor Garcetti for being here today,” Qazi told the crowd of reporters and demonstrators, “and for finally declaring that Los Angeles is a sanctuary city for all people.” Cheers broke out; it was one of the biggest applause lines of the event.

Since Trump’s election, Garcetti has resisted the term “sanctuary city” as an appellation for Los Angeles, a city with one of the largest undocumented populations in the country. In an interview with National Public Radio a week after the inauguration, he said, “We’ve never declared ourself a sanctuary city; I’m still not sure what one is.”

It has become a routine line for the mayor. He sometimes follows it by explaining that the police do, in fact, routinely cooperate with Immigration and Customs Enforcement — when it’s done constitutionally, he emphasizes, with a warrant from a judge.

The common understanding of a “sanctuary city” is one in which local police are prohibited from collaborating with immigration authorities. By that definition, technically, Garcetti is correct: Los Angeles is not a sanctuary city. Throughout the Obama administration, the Los Angeles Police Department routinely engaged in joint operations with ICE. LAPD officers have historically shared intelligence with ICE through the CalGang database system, and ICE agents are in the county jails on a near-daily basis.

L.A.’s main qualification as a sanctuary city is Special Order 40, an LAPD directive from 1979 that prohibits officers from detaining or questioning people solely on the basis of their immigration status. Special Order 40 sets a floor for the separation of local law enforcement from federal immigration enforcement. But it’s a pretty low standard. It was under Special Order 40 that all of the aforementioned direct collaboration with ICE took place.

“When he says things like, ‘I don’t even know what a sanctuary city means,’ we’re upset by his refusal to share that aspiration with us,” Qazi told me.

“I would hope that for a city as terrified as it is now, that he would just say it’s a sanctuary city,” said Villagra. “That’s the language people understand; that’s what would give comfort at this moment.” 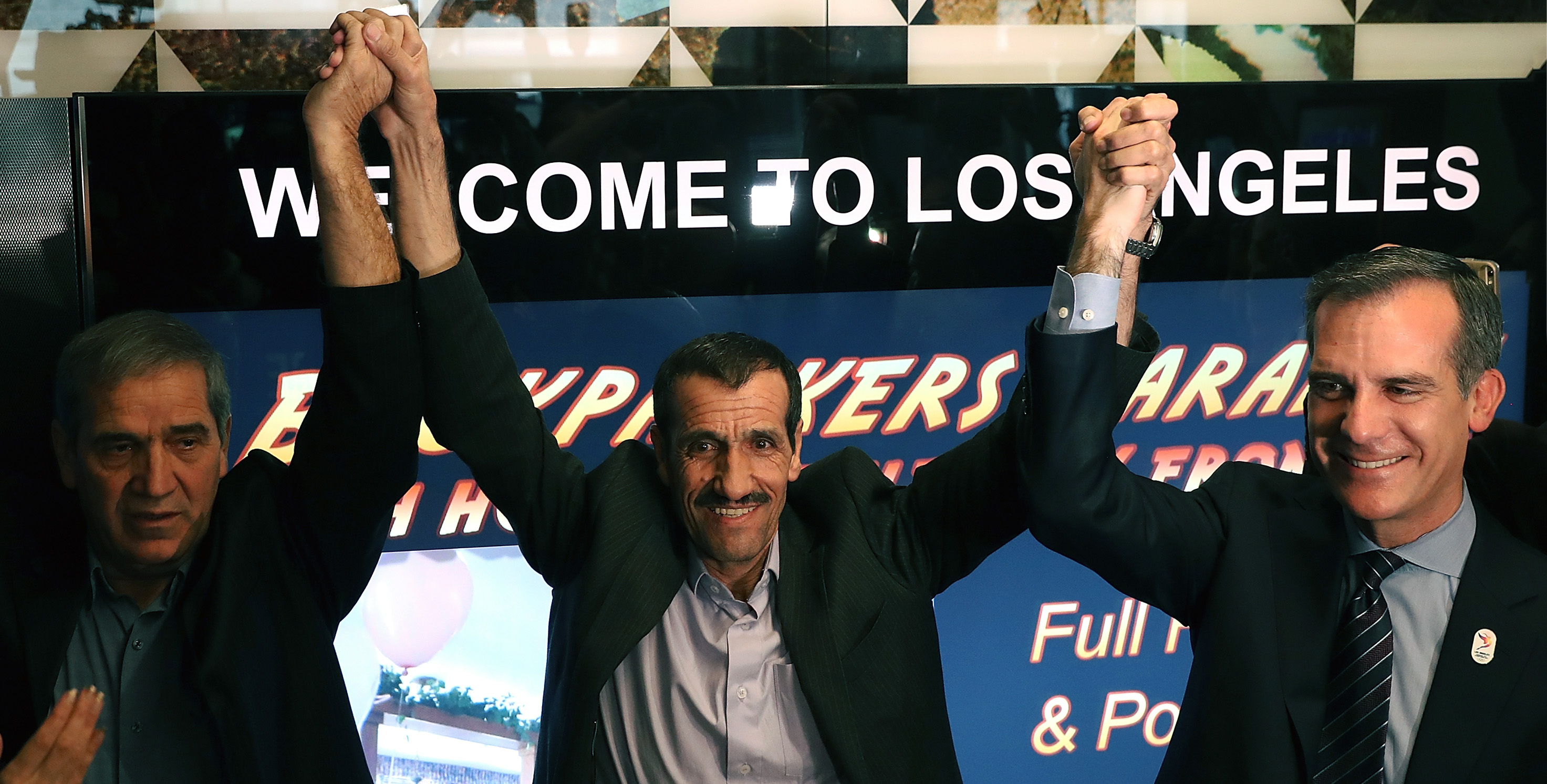 Other mayors have gone much further than Garcetti in openly confronting the president’s attacks on immigrants. Martin Walsh, the mayor of Boston, invited immigrants to move into his office. Chicago Mayor Rahm Emanuel has shown none of Garcetti’s squeamishness over using the term “sanctuary city.” San Francisco, which has done more than possibly any other city to enforce its noncooperation policy with ICE, has sued the Trump administration over its threats to sanctuary cities. Immigration hardliners, including the president, have made San Francisco the whipping boy of their campaign against sanctuary cities ever since the high-profile killing of Kate Steinle in 2015 by an undocumented immigrant. That didn’t stop Mayor Ed Lee from asserting, “Our city is still a sanctuary city and we are going to remain a sanctuary city” in response to Trump’s executive order.

Qazi said she was genuinely excited that day at the airport when Garcetti pronounced the phrase — or a close variation of it — in public. A few days later, however, he backpedaled.

Julia Wick, editor-in-chief of the LAist, followed up with the mayor’s office after the LAX press conference, asking what he meant by “city of sanctuary” and whether it constituted an official designation of L.A. as a sanctuary city. She received a statement in response that argued that “our city’s commitment to immigrants is measured by our actions, not labels.” It pointed out that the mayor had opened a new Office of Immigrant Affairs and pledged that L.A. would “continue to be a city of protection and refuge.” The statement included the word “sanctuary” nowhere within it. (When I asked the mayor’s office about his avoidance of the term, I was sent the exact same statement.)

Wick passed the mayor’s statement along to the ACLU for their comment. They were taken aback by the about-face.

“He’s been doing this dance between refusing to call the city a sanctuary city, because he says he doesn’t know what it means, because he worries it might expose the city to legal liability,” Villagra told me. “But on the other hand, he’s running around calling the city ‘a city of sanctuary.’ By that he intends to draw some distinction. I don’t know what it is.”

GARCETTI’S RHETORIC AROUND sanctuary cities isn’t the only thing that has left immigrant advocates in Los Angeles frustrated and disappointed in his leadership since Trump took office. They also complain that he is in the process of watering down a major local initiative to provide due process to the targets of Trump’s deportation regime, and in the process, reinforcing a “good immigrant” versus “bad immigrant” worldview that they are eager to leave behind.

Last December, the city established a $10 million legal defense fund to provide attorneys to indigent defendants in immigration courts (unlike in criminal courts, there is no right to a court-appointed public defender in immigration proceedings). The coalition of community groups that championed the effort (and its statewide counterpart) conceived of the L.A. Justice Fund as a way to provide universal representation to immigrants in removal proceedings, and to move beyond the policy framework that characterized much of Obama’s second term.

In 2014, President Obama made a major address to the nation on his immigration policy. He pledged to “keep focusing enforcement resources on actual threats to our security. Felons, not families. Criminals, not children. Gang members, not a mom who’s working hard to provide for her kids.”

Following that speech, “felons, not families” became the guiding principle of his administration’s immigration bureaucracy, at least rhetorically. But “felons” turned out to be a remarkably malleable label. About two years after the president’s speech, an investigation by the Marshall Project showed that out of 300,000 deportations that had occurred since the new policy was announced, about 60 percent of them involved immigrants “with no criminal conviction or whose only crime was immigration-related, such as illegal entry or re-entry.” Immigrants with convictions for violent crimes comprised less than a fifth of the total. Under “felons, not families,” immigrants have been deported for decades-old drug charges for which they’d already served time, or for baseless allegations of gang membership.

The criminal label, advocates argue, has been more effective as a rhetorical cover for indiscriminate deportations than as a tool for separating those who threaten public safety from those who do not. Those advocates are eager to see California, as the nation’s epicenter of anti-Trumpism, abandon the “felons, not families” dichotomy in favor of guaranteed due process for anyone swept up by ICE.

But Mayor Garcetti, along with City Attorney Mike Feuer, has been pushing in the opposite direction. Immigrant rights advocates believe that City Hall is devising “carve-outs” from the fund — exemptions from eligibility for those who have run afoul of the criminal justice system at any point in their tenure in the United States.

“He’s been apparently advocating for this carve-out,” Villagra said. “We’re very concerned about any effort to dole out fairness that decides that some are deserving of it and some are not. Fair is fair and doesn’t recognize any exception.”

Villagra continued: “It’s also really disturbing for a progressive leader in a progressive city to essentially be reinforcing the Trump frame of good and bad immigrants, and buying into that rhetoric.”

When I asked the mayor’s office if they were planning to exclude people with prior felony convictions from accessing the L.A. Justice Fund, I was told that “the city council is still reviewing the process for using these public funds.”

“The purpose of the L.A. Justice Fund is to assist immigrants who are facing deportation proceedings without a lawyer,” George Kivork, the mayor’s press secretary, emailed me. “The mayor believes very strongly that people who have built their lives in America deserve all of the protections that our judicial system provides.”

AT AN IMMIGRANT RIGHTS march earlier this month, thousands of protesters swarmed the steps of City Hall, filling up the street and the park behind it. One speaker after another took the stage and expressed their fury and defiance against the ICE raids that have swept through Southern California in recent weeks. This wasn’t the first immigration rally in Los Angeles since the election, but this time, Trump was not the only object of the protesters’ scorn. 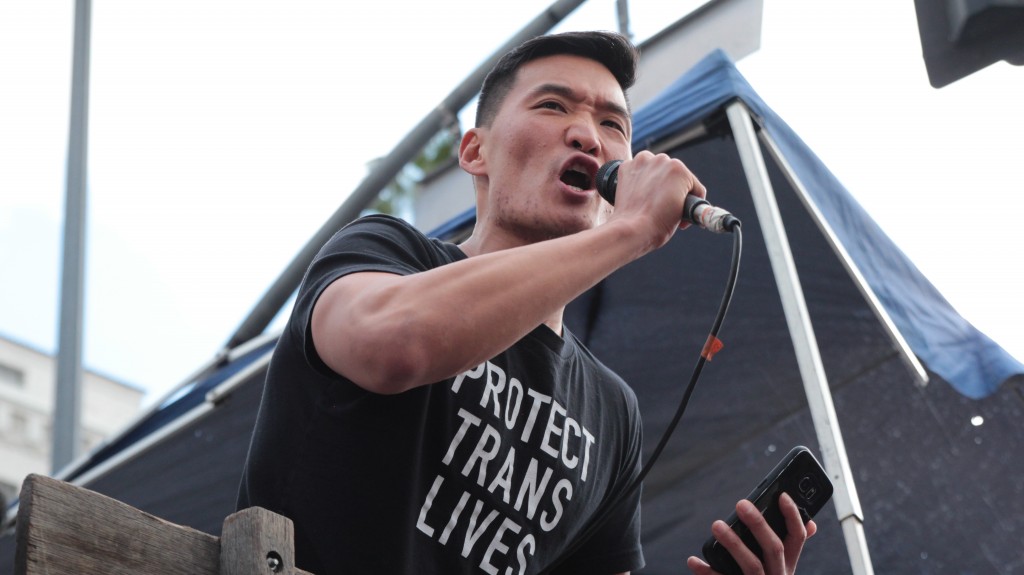 The first speaker to take the stage asked the crowd to help her make a new hashtag trend: #OneTermGarcetti. After a dozen other speeches, many of them littered with derision of the mayor, Andrés Kwon, an ACLU attorney who is also an Argentine immigrant of Korean ancestry, took the microphone.

After sitting through close to an hour of speeches, the audience exploded at the sly comparison between the mayor and Donald Trump. Among this crowd of hard-core pro-immigrant activists, the mayor’s name had become a line for booing and hissing.

On Tuesday, March 7, Garcetti will face the voters in an election for a second term. Nobody expects him to lose. He faces no real opposition, and voters in L.A. are barely aware the election is happening at all. He will coast into City Hall in spite of the growing anger from his adversaries in the immigrant rights movement. So far, he has not had to pay a steep political price for sidelining their demands. The political path he has taken has been bumpy, but safe.

Villagra suspects that may not last. “They haven’t realized just how strong the feeling is among their constituents that they need to be doing more,” he told me. “The frustration is widespread, and growing. I think that people are getting fed up.”

“He has had so many opportunities to step forward and be a real leader, and he has just refused to,” Ameena Qazi said. “He seems to be more in it for his political career. That’s what he’s been showing us so far.”